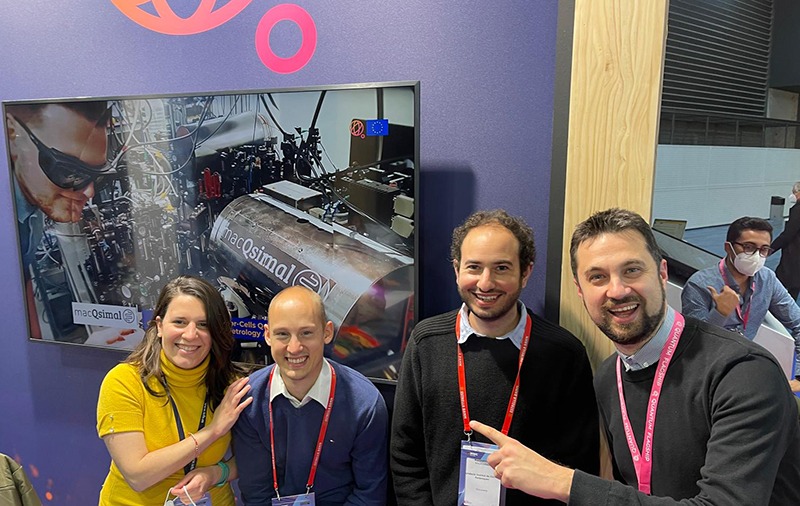 Mobile World Congress 2022 (MWC) took place from February 28th to March 3rd. The world’s largest and most influential connectivity event hosted over 61,000 attendees from almost 200 countries. It also hosted a zone dedicated to showcasing the innovation and development in Quantum Technologies that Europe is driving forward, The European Quantum Space.

The stand introduced three main areas: The Quantum Flagship (QF), Regional Initiatives and Start-ups/Companies. macQsimal was presented as part of QF through the slideshow on a screen, displaying the global picture, the goals and the applications of the project.

One of the regional initiatives showcased was QuantumCAT, a hub of research institutions in Catalonia and industrial actors. Precise and portable atomic sensors for magnetic resonance diagnostics are amid four sectors on which the Hub focuses. One of the key representatives of the QuantumCAT at MWC was Prof. Morgan Mitchell, the leader of work package 4 (Miniature optically-pumped magnetometers) in the macQsimal project.

Prof. Mitchell and other macQsimal representatives from ICFO were available to talk to visitors interested in Quantum Sensing and Metrology, one of the four pillars of Quantum Technologies.

Dr. Vito Giovanni Lucivero from ICFO, who has attended the event, shares his impressions:

For a few days, it was great to be out of the laboratory and to talk about the technology we are developing within macQsimal as well as its applications, in such a massive event as the MWC2022. In fact, it is important to find connections with different companies and startups, to close the gap between scientific research and the real needs of the market. The European Quantum Space was located in the 4 Years from Now Hall (4YFN), a space where it was very interesting to get in touch with many digital and tech startups located in the Barcelona and Catalunya ecosystem.